CUBA REAL: TRIOJERWOOD THEATRE UPSTAIRS
INTERNATIONAL PLAYWRIGHTS SEASON- 2004 A Genesis Project
by Norge Espinosa Mendoza
Translated by Gwynne Edwards
02 April 2004
Evening Performances - 7.45pm
Sick with nostalgia, drag artist Adoracion returns to Havana from Miami to ask his nephew Ismael for a final favour. But both Ismael and Havana have changed beyond recognition and Ismael's lover Isaac is not the only obstacle to Adoracion's wishes.
Cast
Isaac... Daniel Evans
Ismael... Michael Maloney
Angel ...Hans Matheson
Adoracion... Ian McKellen
Direction... Richard Wilson
Lighting ... James Glanville
Sound ... Emma Laxton
Casting ... Amy Ball
Stage Management ... Pea Horsley, Nicole Keighley
Interpreter... Lucy Van Hove
Thanks to Claire from the Royal Court Theatre for the information.
Norge Espinosa Mendoza was born in Santa Clara and is a published poet, critic and playwright. He works as the Resident Dramaturg at Teatro Publico in Havana. His most recent play ICARUS was staged there and won the Critics Prize of 2003. Norge has been part of the Royal Court Cuban Playwrights Projects since 2002 and received a British Council Bursary to attend the Royal Court International Residency in the Summer of 2003.
Thanks to Marysia for this excerpt and for alerting us to this production. p Marysia's review here. 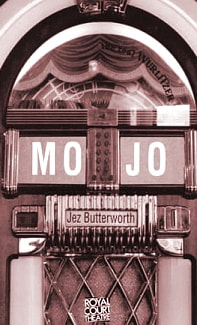 Mojo (1997)
​
Mojo received its world premiere at London's Royal Court Theatre in 1995, where it won the Olivier Award for Best Comedy. The Guardian hailed the play as "The Royal Court's most dazzling main-stage debut in years," and the Evening Standard called it "a jet-black comedy that arouses shudders of amusement and laughter." The play garnered Butterworth numerous awards including the Writers' Guild New Writer of the Year award and both the George Devine and Evening Standard awards for Most Promising Playwright. Mojo has since been translated into nine languages.Jez Butterworth - Writer and Director
Born 4 March, 1969 in London, Jez Butterworth was brought up, with his brother Tom, in St. Albans and educated at Cambridge University. Together with his brother he wrote THE CENSUS MAN as part of Carlton Television New Writer Course. This led to their being commissioned in 1993 to make THE NIGHT OF THE GOLDEN BRAIN, a short film about a pub quiz team, (GOING UNDERGROUND series).
Jez then wrote his first stage play MOJO, which opened at the Royal Court Theater in 1995 and was an incredible critical and public success, with the play winning the Olivier and Evening Standard Most Promising Playwright Awards. He then teamed up again with Tom to co-write CHRISTMAS (1996), a modern morality tale about a teenager, set in London, which was broadcast on Channel 4 and directed by Mark Munden. With MOJO, Jez Butterworth makes his debut as a feature film director.
"During the long process of writing the screenplay I made an exhilarating discovery: Mickey's guilt and Baby's pain are essentially private, silent, there for us to watch. This is what the film is about - so the story might be better told on film". -- J. Butterworth
Information from the Aiden Gillen site