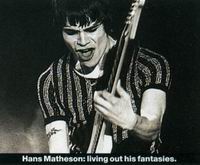 
Empire Magazine (UK), 1998,
"You don't get many chances in this world to be full of yourself," begins Hans Matheson, staring into the choocolate swirls of his cappuccino. "So for this I thought, fuck it, go for it."
Matheson, 23, is reflecting on Still Crazy, a likeable Britcom penned by Ian le Frenais and Dick Clement, in which he is recruited by an aging rock band Strange fruit (aka Stephen Rea, Jimmy Nail, Bill Nighy and Timothy Spall) to raunch up their passed-it image.
After intense roles in Stella Does Tricks and Mojo (playing another guitar guru Johnnie Silver) and the up-coming Les Miserables, Still Crazy was a change of pace for the 23 year old actor.
"I've never been involved in making a comedy and the vibe on set is so different" But the experience allowed him full reign to strut his stuff. "There's nothing like living out your fantasies," he grins. "You go back to your caravan in your skin-tight velvet trousers with your guitar and you feel like a rock star. You can't help it."
Matheson will next be seen as Marius in Les Miserables opposite Liam Neeson, Geoffrey Rush, Claire Danes and Uma Thurman, a more impersonal experience than his low-budget forays. "The communication between the actors and the directors was less," he says. "I didn't feel as grounded." Citing Mike Leigh, Gus van Sant and Martin Scorsese as top of his work-with wish list ( I find it ironic that Mel Gibson has won an Oscar and Scorsese hasn't), Matheson's most pressing priority is to flex his creative muscles.
"I think I am yet to show my true colours as a performer. I've certainly had fun playing rock stars but there's a lot more to me than that."
Still Crazy is released on October 30
Ian Freer
​

Thanks to Brooke for providing this article.
This image was included in the article, Click to see an autographed poster version